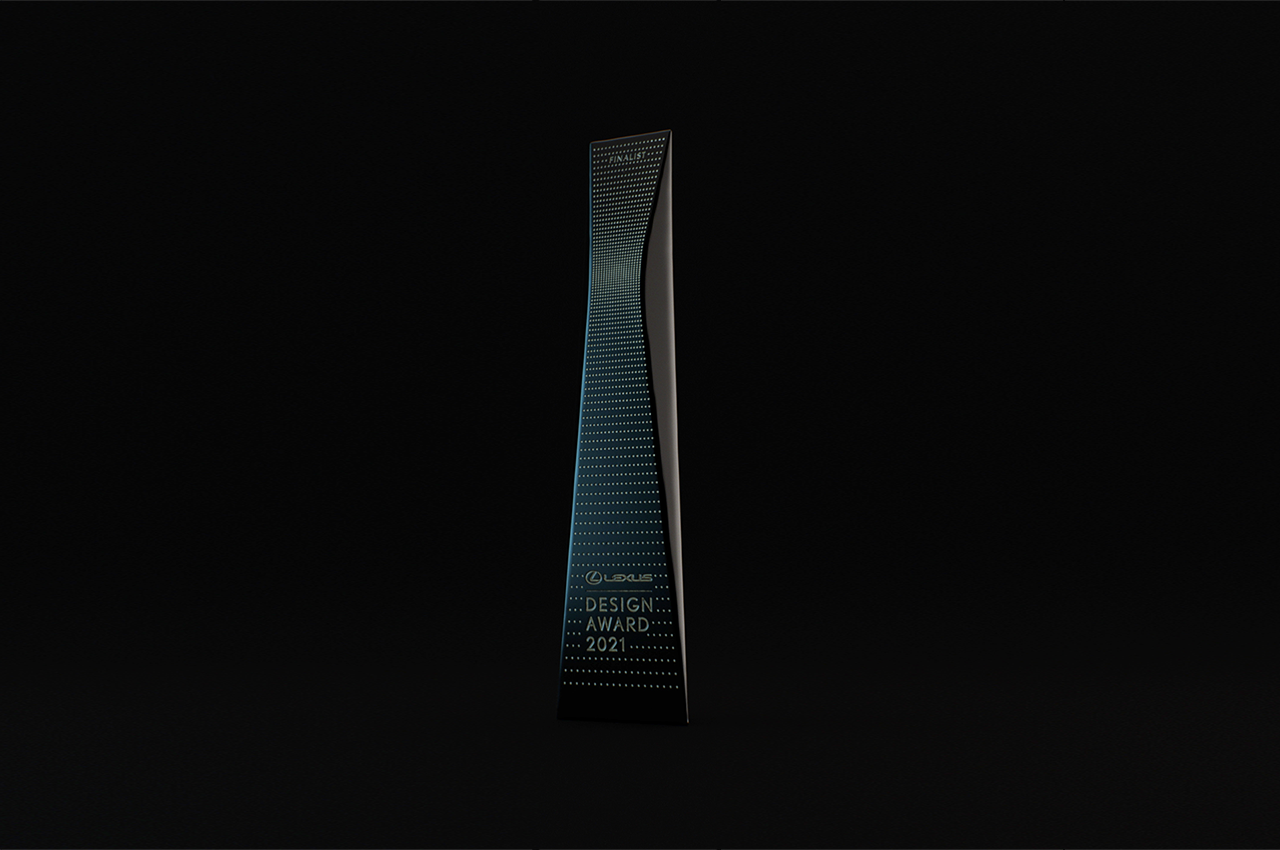 Next-generation talents have been competing for the Lexus Design Award since its 2013 debut, taking on the challenge of creating Design for a Better Tomorrow. This year marks the ninth year of the international competition, with an impressive 2,079 entries submitted from 66 countries! A distinguished panel of jurors have narrowed down the pool to six finalists whose ideas embody the three principles of the Lexus Design Award – Anticipate, Innovate and Captivate. What’s on the line? A once-in-a lifetime experience to prototype their ideas with a project budget of ¥3,000,000 (approximately $25,000). 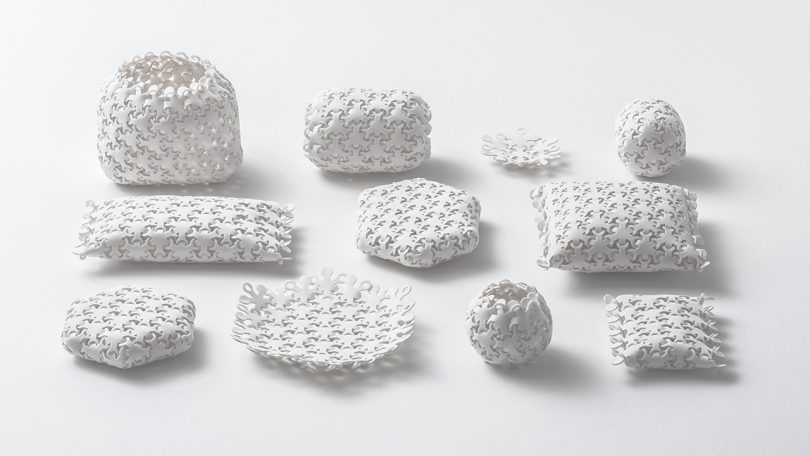 CY-BO by Kenji Abe (Japan)
CY-BO packing materials can be transformed into various shapes by combining different pieces. The material is formed out of a sponge-like material, and by overlapping it the interior becomes highly cushioned. The pieces can be rearranged any number of times, not only as packaging materials, but also pen cases, baskets, lamp shades, and more. CY-BO envelops fruits and dishes, and can even be used as a coaster thanks to its excellent water resistance. This product ultimately helps cut down on the discard of packing materials and can be reused as many times as possible. 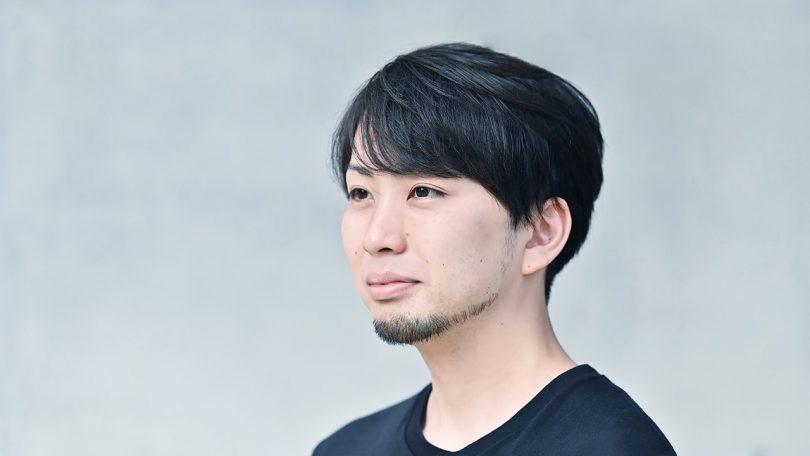 In mid-January, the finalists attended a five day workshop where they were mentored by leading design experts Joe Doucet, Sabine Marcelis, Mariam Kamara and Sputniko!. The mentors’ love of guiding young talent partnered with a challenging curriculum gave way to fully engaged sessions for the finalists. 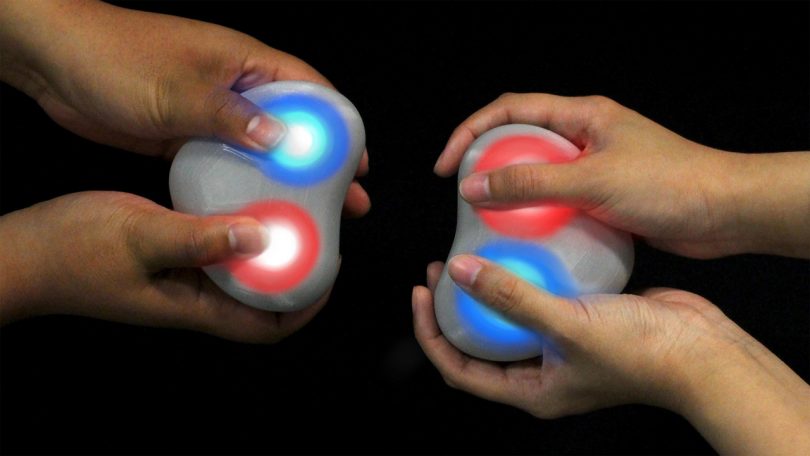 Heartfelt by Gayle Lee and Jessica Vea (New Zealand & Tonga, based in New Zealand)
A live-streamed funeral was the starting point of Heartfelt, a device that enables virtual hugs. Providing an emotional connection when apart from your loved ones, such as during the pandemic, the product works in long-distance pairs. While one person cradles their device in their hands, the other device will warm to the same temperature at the same time. The temperature reflects the person holding it, and if not being held, will drop to room temperature (neutral). An LED is used to create a visual expression of both heartbeats – two differing LEDs pulsing at the same time, each half of the heart lit up in different colors to represent each user. 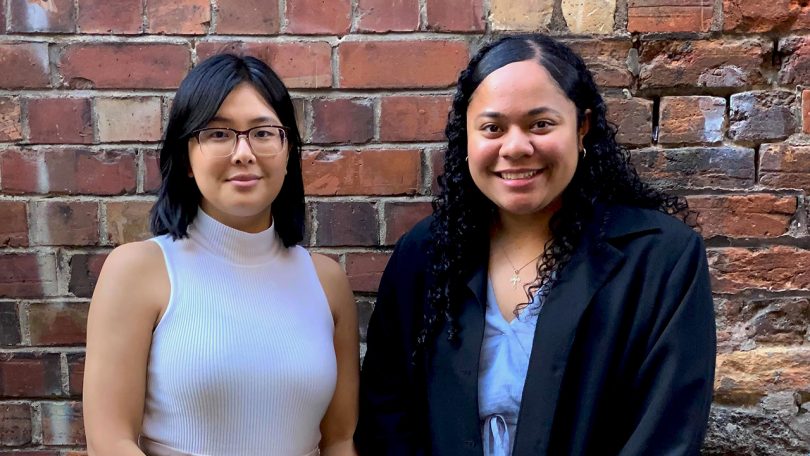 Once the workshop finished, Mariam Kamara said, “I was struck by the level of optimism and commitment the finalists have shown in their designs. In this new COVID-19 reshaped world, their visions and sensitivity is a gift to us all. Each one of them was incredibly passionate about the projects and demonstrated a strong motivation to delve deeper and do the necessary research to strengthen the final result. Though the mentoring was remote, a combination of powerful online tools and well-prepared finalists made for a fluid, productive and enjoyable process. I look forward to seeing where they take their designs in the coming months.” 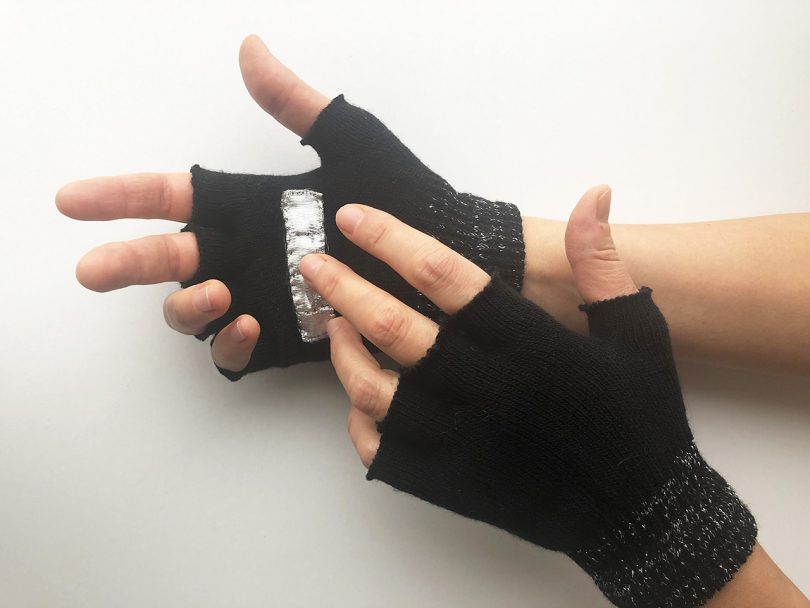 InTempo by Alina Holovatiuk (Ukraine)
InTempo mitts may help distract the user from stressful situations through the use of rhythm and music. Rhythm therapy has the potential to replace medications, alcohol and therapy visits to improve the psychological state of a person. Fingerprint-shaped touch buttons on the palm side consist of five layers that form a durable touch panel. The outer and central layers are conductive, while two more insulating layers live on either side of the central one. When touched, the layers are compressed, forming a closed electric circuit. These influences are measured and interpreted using electronic controllers that convert the action into a signal for a controlled electronic device (player, smartphone, computer, etc). Touches on the four fingerprint fields are then registered and synchronized with the rhythm of the melody that is playing. When the rhythm coincides, the lower part of the mitt above the wrist will vibrate briefly as a reward. 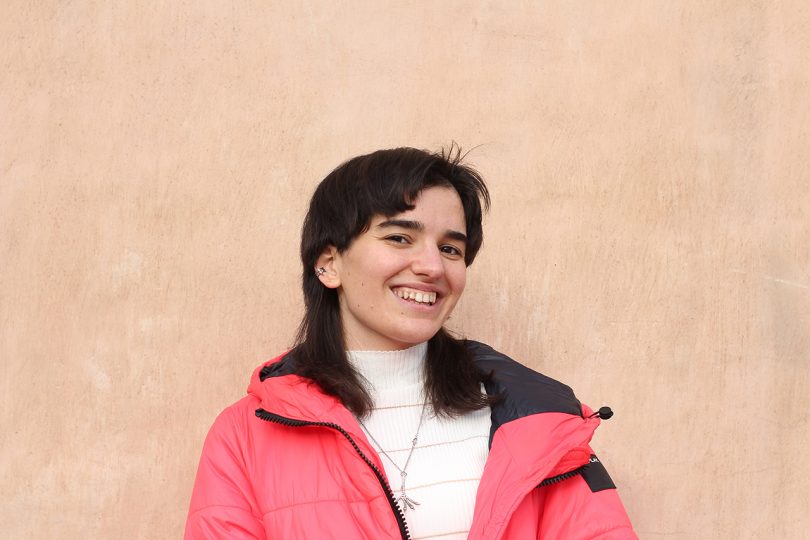 The finalists will continue to work with their mentors through the development of their prototypes as we grow closer to the Grand Prix selection. A judging panel of renowned design leaders awaits their finished projects: Paola Antonelli, Dong Gong, Greg Lynn and Simon Humphries will select Grand Prix Winner based on their final prototypes and presentations later this month. 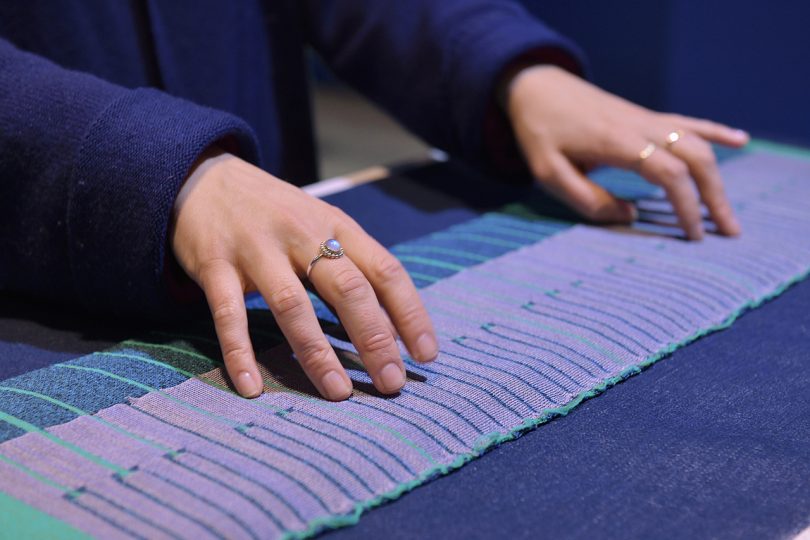 KnitX by Irmandy Wicaksono (Indonesia, based in USA)
3D knitting with computerized machines enable users to personalize their own textile patterns and structures through visual programming and a variety of yarns. KnitX is a computational and functional design principle for textile-based interactive surfaces. Functional yarns – such as resistive, conductive, thermochromic, photochromic and thermoplastic – are integrated to create responsive sensing (proximity, pressure, touch, and stretch) and actuation (color-changing and heating) capabilities. This approach allows for the rapid fabrication of seamless, responsive multi-dimensional textiles for applications from fashion to architecture. Demonstrations of possible work include: a musical fabric skin that allows users to interact and play discrete notes, harmonies, and soundscapes, a photochromic seamless knit textile that responds to UV and sunlight and a 3D responsive textile fabricated through thermoforming. 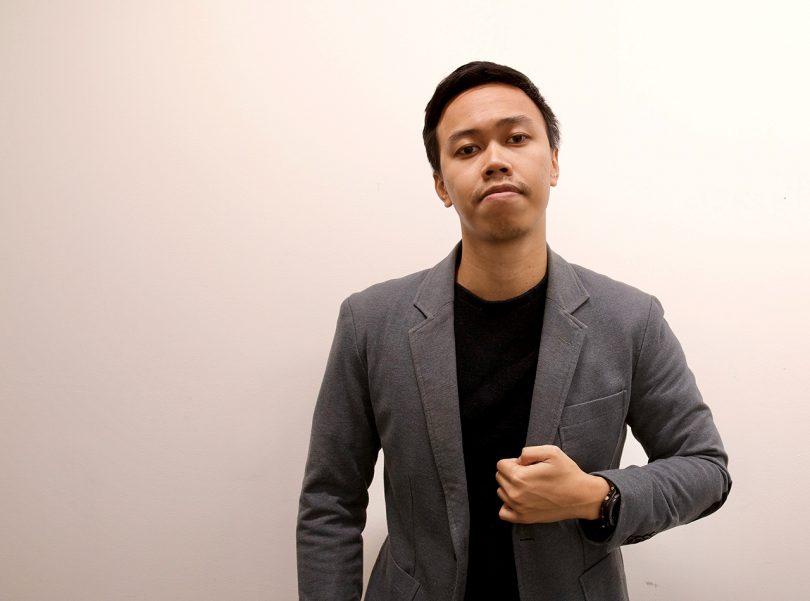 Lexus Design Award 2021 judge Greg Lynn said, “In the middle of a changing climate and a global pandemic there was a predictable urgency to the problems being addressed by the designers. Across all the proposals we saw, there was also a humanity and intimate scale.” 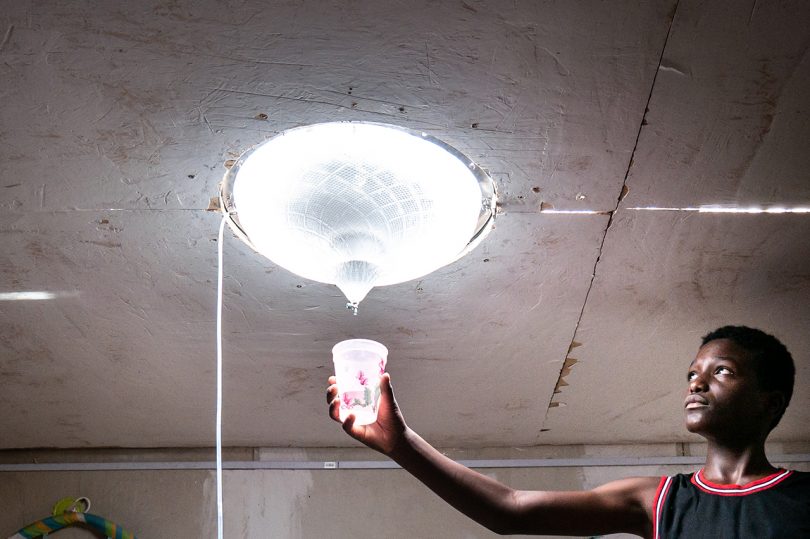 Solar Desalination Skylight by Henry Glogau (New Zealand & Austria, based in Denmark)
Chile currently has around 110,000 families living within 800 informal settlement communities. They live off the grid, devoid of services like water, electricity and sanitation. Windows are boarded up for security, privacy and protection from the environment and let in little natural light. An alternative to hacking the system could be the Solar Desalination Skylight. The prototype uses solar energy and seawater to create a product that emits naturally diffused light, produces drinking water and utilizes leftover salt brine for energy creation. Salt brine waste further used to create a source of energy when placed in storage tubes holding copper and zinc. These 12 salt batteries provided 9.53 volts, powering an LED light strip during the night and charged by a mini solar panel during the day. The desalinated water also adds a dappled effect to the lighting that changes moods throughout the day, creating a soft ambience for the living room space where family activities take place. 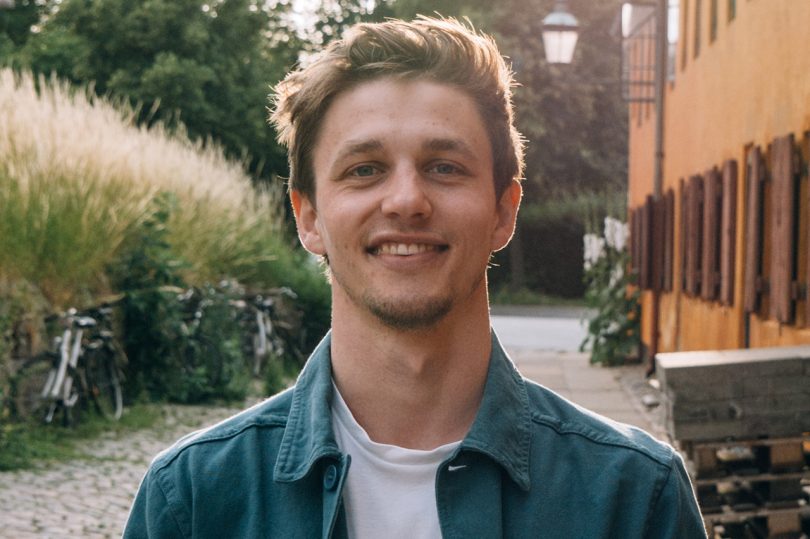 Stay tuned as the Grand Prix Winner will be announced April 27th! To learn more about the Lexus Design Award, visit LexusDesignAward.com. 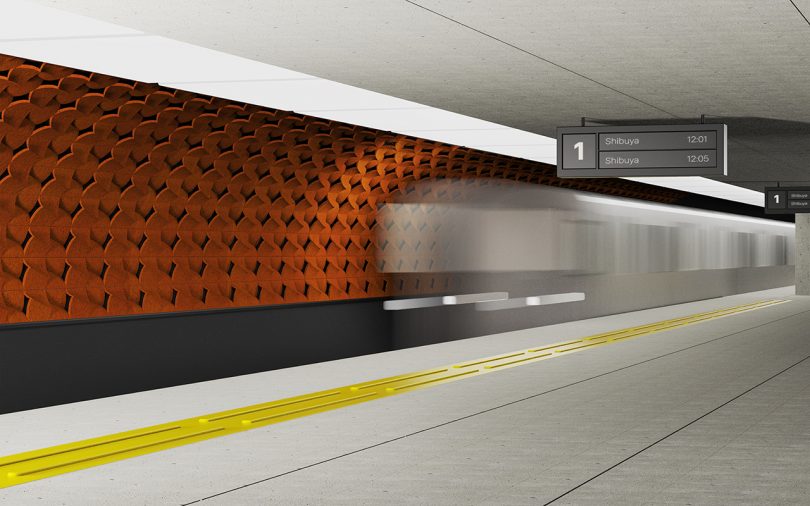 Terracotta Valley Wind by Intsui Design (China, based in Japan)
If you’ve ever ridden a subway in July, you know just how warm it can get on the platform. Heat from the trains and the people only manage to add pressure to any sort of air-conditioning that’s running in the station, leading to higher amounts of energy consumption. Terracotta Valley Wind could change it all, acting as a cooling wall made of spliced terracotta slabs with a water supply system (ideally using reclaimed water). The material has wonderful cooling properties and is cheap, while its porous nature allows water to move easily through the walls. By transmuting water to air it absorbs a relatively large amount of heat, effectively reducing the temperature of the environment. 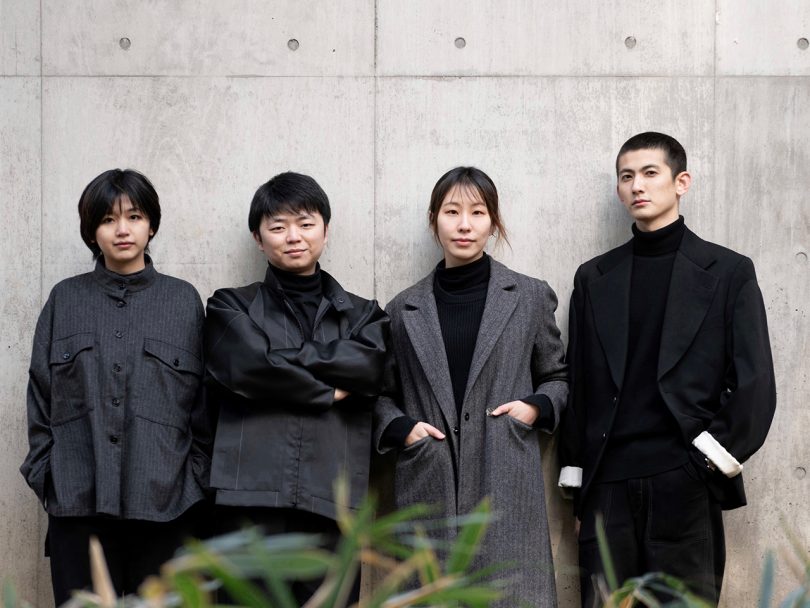 The water evaporates even faster with the wind of the passing trains, creating a cooling effect in the subway station. The whole system is pollution-free and doesn’t require any electricity. 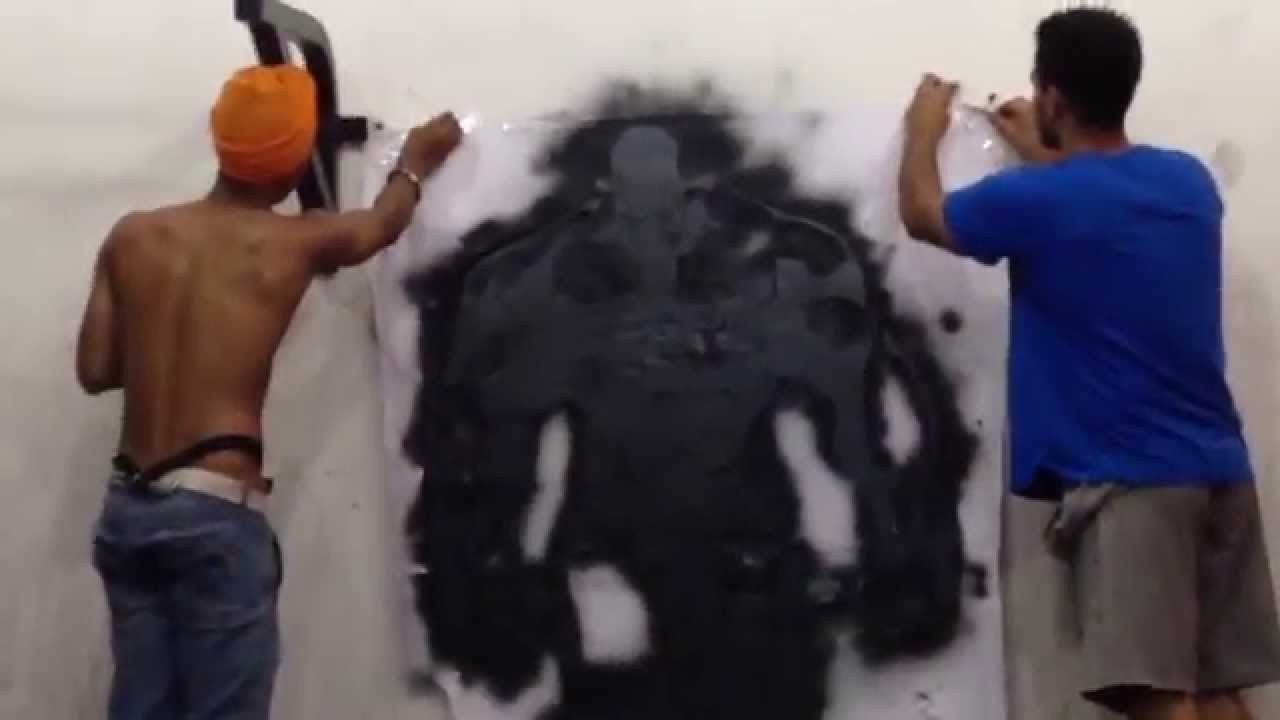 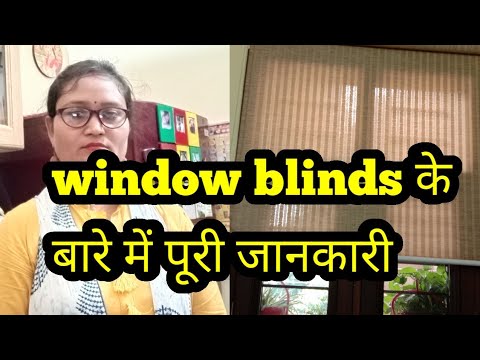 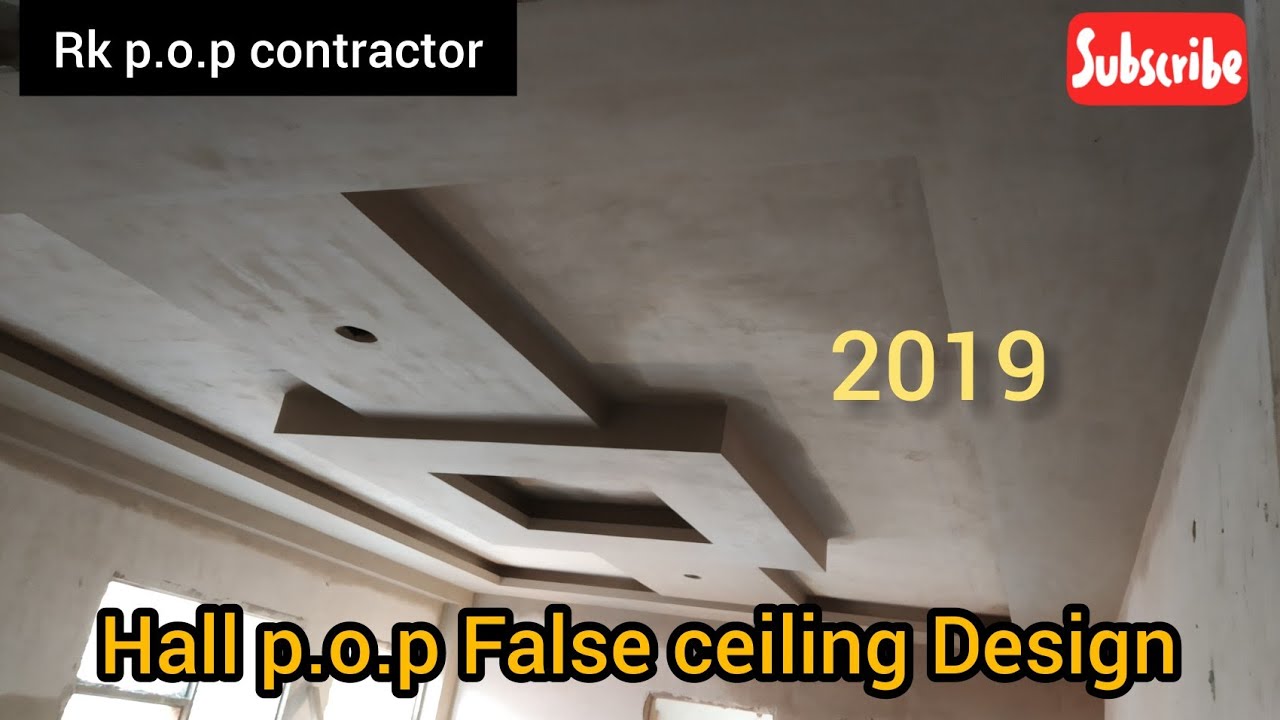